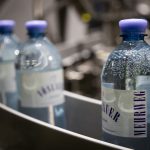 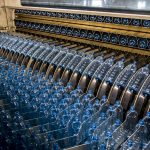 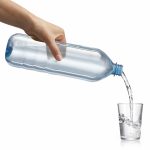 Hard, 2 May 2022 – The ALPLA Group, the global pack­a­ging solu­tions and recy­cling spe­cia­list, has deve­loped a new return­able PET bottle tog­e­ther with Vös­lauer, Austria’s lea­ding com­pany in the mineral water market. The sus­tainable bottle reduces carbon emis­sions by around 30 per cent and bottle weight by almost 90 per cent in com­pa­rison to the reus­able alter­na­tive made of glass. The one-litre bot­tles are now avail­able in stores.

Resource-conserving, light, stable and visually appe­aling – ALPLA has rea­lised the first modern return­able PET bottle for the Aus­trian market tog­e­ther with Vös­lauer. Fol­lowing the 2018 intro­duc­tion of a climate-friendly bottle made ent­i­rely of recy­cled PET, the two family-owned enter­prises are now rol­ling out their next inno­va­tive solu­tion – a one-litre return­able PET bottle. The bottle, which bears the Aus­trian Eco­label, is made of fully recy­clable PET mono­ma­te­rial with a recy­clate pro­por­tion of around 30 per cent. Going through at least twelve usage cycles, the bot­tles are esti­mated to remain in use for three to four years.

Weig­hing just 55 grams, the bottle deve­loped by ALPLA is around 90 per cent lighter than the return­able glass alter­na­tive, redu­cing the carbon foot­print by appro­xi­mately 30 per cent. The low weight has a posi­tive influ­ence on pro­duc­tion, ship­ment and sto­rage of the con­tai­ners. With the intro­duc­tion of the return­able PET bottle, Vös­lauer will make an annual saving of appro­xi­mately 400 tonnes of mate­rial and 420 tonnes of CO2.

About the ALPLA Group
ALPLA is one of the leading companies involved in plastic packaging and recycling. Around 22,100 employees worldwide produce custom-made packaging systems, bottles, caps and moulded parts at 177 sites across 45 countries. The high-quality packaging is used in a wide range of areas, including for food and drinks, cosmetics and care products, household cleaning products, detergents and cleaning agents, pharmaceutical products, engine oils and lubricants.

ALPLA operates recycling plants for PET and HDPE in Austria, Germany, Poland, Mexico, Italy, Spain, Romania and Thailand. Other projects are being realised elsewhere around the world.

About Vöslauer Mineralwasser GmbH
Vöslauer Mineralwasser GmbH based in Bad Vöslau in Lower Austria is the clear number one in the Austrian mineral water market with a market share of over 40 per cent. Vöslauer sees sustainable and resource-conserving production as an important corporate responsibility. All of Vöslauer’s single-use PET bottles are already made entirely of rPET (recycled bottles) and the company has been carbon-neutral since the beginning of 2020. This means the company has itself reduced its carbon emissions by 50 per cent in comparison to 2005, while it offsets the other 50 per cent. In addition, it continues to expand its range of returnable products. Vöslauer is the first mineral water company to offer a 0.5-litre returnable glass bottle and, since April 2022, so far the first company in Austria to offer a returnable PET bottle.