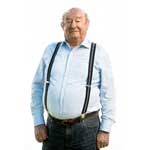 Hard, 13 June 2018 – Alwin Lehner, founder of the Aus­trian pack­a­ging solu­tions spe­cia­list ALPLA, died on Tuesday evening at the age of 86.

On the evening of the 12th of June 2018, Alwin Lehner passed away. Alwin Lehner, born in 1932 in Bre­genz, founded “Alpen­plastik Lehner Alwin GmbH” tog­e­ther with his bro­ther Hel­muth Lehner. He led the com­pany to inter­na­tional success.

As a mecha­nical engi­neer, he acted as the inno­va­tive force during the begin­nings of the com­pany. He was always inte­rested in and pas­sio­nate about tech­nical chal­lenges and was the lead in pionee­ring inven­tions. Only nine years after the com­pany was founded, he laid the foun­da­tion for ALPLA’s world­wide pre­sence. The first plants out­side of Aus­tria were opened in 1964 in Mark­dorf, Ger­many and 1968 in San Joa­quin, Vene­zuela. In 1997, Alwin Lehner retired from the ope­ra­tional manage­ment of the ALPLA group to con­tinue to con­cen­trate on tech­nical deve­lo­p­ments. His role as the CEO of the com­pany was handed over to his son Gün­ther Lehner. Fol­lowing his reti­re­ment he visited the ALPLA head­quar­ters almost daily.

About ALPLA:
ALPLA is one of the leading companies in plastic packaging. Around 19,300 employees worldwide produce custom-made packaging systems, bottles, closures and moulded parts at 176 sites across 45 countries. The high-quality packaging is used in a wide range of areas, including for food and drinks, cosmetics and care products, household detergents, washing and cleaning agents, engine oils and lubricants. ALPLA also operates recycling plants at three locations (Austria, Poland, Mexico) with an annual capacity of 65,000 tonnes of food-grade rPET. ALPLA celebrated its 60th anniversary in 2015.