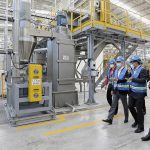 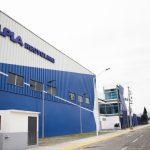 Hard, 11 November 2021 – The ALPLA Group, the global pack­a­ging solu­tions and recy­cling spe­cia­list, has opened a new plant for HDPE plastic recy­cling in Toluca, Mexico. At the same time, the com­pany has announced it will double its annual regrind mate­rial pro­duc­tion capa­city to 30,000 tonnes from the second half of 2022.

ALPLA cele­brated the inau­gu­ra­tion of its new state-of-the-art recy­cling plant for high-density poly­ethy­lene (HDPE) plastics in Toluca, the capital of the cen­tral Mexican State of Mexico, on 10 November. Among the guests were the Aus­trian ambassador to Mexico, Eli­sa­beth Kehrer, and the governor of the State of México, Alfredo del Mazo Maza. Fol­lowing the announ­ce­ment of the plant’s con­struc­tion in Sep­tember 2020, it took a little more than a year for the work to be com­pleted. The invest­ment sum came to around 20 mil­lion euros. Around 70 new jobs have been created at the plant, which will be run as a wholly owned sub­si­diary of ALPLA.

The faci­lity is cur­r­ently desi­gned for an annual capa­city of 15,000 tonnes of recy­cled HDPE (rHDPE) in pellet form. This regra­nu­late is mainly used for the pro­duc­tion of non-food pack­a­ging such as per­sonal care pro­ducts and house­hold clea­ning agents. The demand for recy­cling mate­rial is so high in Mexico and Cen­tral Ame­rica that the majo­rity of the output will be used regionally.

Increase in capa­city to 30,000 tonnes
With the initial start-up of the new recy­cling plant, ALPLA is staying true to its stra­tegic focus of thin­king ahead and inves­ting in regions where the demand for recy­cled mate­rials has a lot of growth poten­tial. Georg Lässer, Head of Cor­po­rate Recy­cling, says: ‘We are delighted to be playing an important part in imple­men­ting a cir­cular eco­nomy locally in Mexico with this new site. In taking this action, we are giving used plastic bot­tles value and are also pro­mo­ting plastics collec­tion and the deve­lo­p­ment of the necessary regional infrastructure.’

The suc­cess of this stra­tegy is evi­denced by the fact that ALPLA can already announce an increase in the recy­cling plant’s annual pro­duc­tion capa­city to 30,000 tonnes star­ting in the second half of 2022. Carlos Torres, Regional Manager Mexico, Cen­tral Ame­rica and the Carib­bean, exp­lains: ‘We are seeing incre­a­sing momentum in the recy­cling market, taking one step for­ward in our com­mit­ment to sus­taina­bi­lity, and the demand from our cus­to­mers in the region for post-consumer recy­cled mate­rials is rising. This is enab­ling us to already initiate an increase in our pro­duc­tion of rHDPE in Toluca.’

Expe­ri­ence with PET recy­cling in the region
ALPLA has many years of expe­ri­ence in recy­cling post-consumer PET in Mexico. The first bottle-to-bottle recy­cling plant in Latin Ame­rica, Indus­tria Mexi­cana de Reci­c­laje (IMER), went into ope­ra­tion back in 2005. IMER is a joint ven­ture bet­ween ALPLA México, Coca-Cola México and Coca-Cola Femsa. By joi­ning forces, the part­ners have estab­lished the infra­st­ruc­ture for collec­ting and recy­cling used PET beverage bot­tles over the past 15 years. They pro­duce close to 15,000 tonnes of food-grade flakes from post-consumer PET a year.

Expan­sion of recy­cling activities
In early 2021, the ALPLA Group announced that it would invest an average of 50 mil­lion euros a year until 2025 in the ongoing expan­sion of its recy­cling acti­vi­ties. In par­ti­cular, it plans to glo­ba­lise its acti­vi­ties in the area of high-quality recy­clates in order to close the mate­rials cycle in as many regions as pos­sible. In all, the annual capa­city of the ALPLA recy­cling com­pa­nies, joint ven­tures and part­ners­hips amounts to appro­xi­mately 130,000 tonnes of PET and 60,000 tonnes of PE.

About the ALPLA Group
ALPLA is one of the leading companies involved in plastic packaging. Around 21,600 employees worldwide produce custom-made packaging systems, bottles, caps and moulded parts at its 178 sites across 45 countries. The high-quality packaging is used in a wide range of areas, including for food and drinks, cosmetics and care products, household cleaning products, detergents and cleaning agents, pharmaceutical products, engine oils and lubricants.

ALPLA operates its own recycling plants for PET and HDPE in Austria, Poland, Mexico, Italy and Spain, and in the form of joint ventures in Mexico and Germany. Other projects are being realised elsewhere around the world.