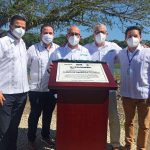 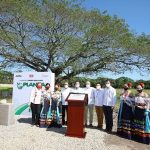 Hard, 26 January 2022 – With the aim of boos­ting the cir­cular eco­nomy in the states of south-east Mexico, a cor­ner­stone cere­mony was held to mark the start of con­struc­tion of the new PLANETA recy­cling plant in the muni­ci­pa­lity of Cun­du­acán in the State of Tabasco. The pro­ject is the result of a joint ven­ture bet­ween ALPLA, a global leader in the deve­lo­p­ment and pro­duc­tion of sus­tainable plastic pack­a­ging solu­tions and bottle-to-bottle recy­cling, and Coca-Cola FEMSA, the lar­gest bot­tler of Coca-Cola pro­ducts in the world.

With an invest­ment of more than 60 mil­lion dol­lars, the recy­cling plant Planta Nueva Eco­logía de Tabasco – better known as PLANETA – will be equipped with the most modern tech­no­logy avail­able world­wide. It will have the capa­city to pro­cess 50,000 tonnes of post-consumer PET bot­tles per year, which will result in 35,000 tonnes of recy­cled PET mate­rial ready for reuse.

The cor­ner­stone cere­mony was led by Guil­lermo Arturo del Rivero León, secretary of the government of Tabasco, and was attended by renowned figures such as Carlos Torres Bal­les­teros, ALPLA mana­ging director for Mexico, Cen­tral Ame­rica and the Carib­bean; John Santa Maria, chief exe­cu­tive officer of Coca-Cola FEMSA; Abraham Cano, mayor of Cun­du­acán; and José Fried­rich García Mal­litz, secretary for the eco­nomic deve­lo­p­ment and com­pe­ti­ti­ve­ness of Tabasco.

Deve­lo­p­ment node for south-east Mexico
The con­struc­tion and ope­ra­tion of the PLANETA recy­cling plant is expected to gene­rate more than 20,000 direct and indi­rect jobs and will thus make a key con­tri­bu­tion to the objec­tives of the Mexican government headed by Pre­si­dent Andrés Manuel López Obrador to pro­mote deve­lo­p­ment and employ­ment in south-east Mexico.

Its stra­tegic loca­tion in the region with the grea­test poten­tial for solid waste recy­cling will also make it an important deve­lo­p­ment node that will inte­grate 18 collec­tion cen­tres throughout south and south-east Mexico. In addi­tion to offe­ring an envi­ron­mental ser­vice, it will boost the region’s economy.

Reduce, reuse, recycle
ALPLA and Coca-Cola FEMSA are embra­cing their posi­tion as lea­ding com­pa­nies to pro­mote and imple­ment effec­tive mea­sures to reduce pol­lu­tion, reuse plastic waste and rein­force the collec­tion and recy­cling chain.

ALPLA CEO Philipp Lehner says, ‘The big chal­lenge today is the hand­ling of the mate­rials after the con­sump­tion phase. We are cur­r­ently inves­ting world­wide in sys­tems to give plastic pack­a­ging a value – because then it is collected and recy­cled. With strong part­ners like Coca-Cola FEMSA at our side, we will be able to set up the necessary infra­st­ruc­ture and close the bottle cycle in as many regions as possible.’

John Santa Maria, CEO of Coca-Cola FEMSA, exp­lains, ‘As an envi­ron­ment­ally respon­sible Mexican com­pany dedi­cated to crea­ting eco­nomic, social and envi­ron­mental value in the com­mu­nities in which it ope­rates, Coca-Cola FEMSA is per­ma­nently com­mitted to caring for the planet. This is why we are imple­men­ting a series of mea­sures to pro­mote recy­cling with the goal of reco­vering 100% of post-consumer packaging.’

Global recy­cling initiatives
In col­la­bo­ra­tion with all of the com­pa­nies that make up the Coca-Cola Mexican Industry (IMCC), Coca-Cola FEMSA is part of the global World Without Waste initia­tive laun­ched by the Coca-Cola Com­pany, which aims to make all pack­a­ging 100% recy­clable by 2025, inte­grate 50% recy­cled PET resin into bot­tles and collect 100% of the pack­a­ging by 2030.

ALPLA mana­ging director for Mexico, Cen­tral Ame­rica and the Carib­bean, Carlos Torres Bal­les­teros, stated, ‘This new recy­cling plant for food-grade PET will be ALPLA’s third recy­cling plant in Mexico, which makes us a spear­head at a national level and a recy­cling bench­mark for the rest of the world. As part of our com­mit­ment to sus­taina­bi­lity, ALPLA will invest more than 50 mil­lion euros every year bet­ween 2021 and 2025 to expand its global recy­cling capacity.’

In 2018, ALPLA and Coca-Cola FEMSA joined the New Plastics Eco­nomy Global Com­mit­ment laun­ched by the Ellen MacAr­thur Foun­da­tion in col­la­bo­ra­tion with the United National Envi­ron­ment Pro­gramme. Its goals are to make 100% of its pro­ducts reus­able, recy­clable or com­post­able by 2025 and to have 25% post-consumer recy­cled mate­rial in total mate­rial con­sump­tion by that year.

On this occa­sion, Guil­lermo Arturo del Rivero León, secretary of the government of Tabasco, high­lighted that ‘PLANETA repres­ents Coca-Cola FEMSA and ALPLA’s com­mit­ment to sus­taina­bi­lity but, at the same time, it is one more step towards a cir­cular eco­nomy, which is essen­tial for achie­ving the Government of Tabasco’s inter­na­tional com­mit­ment in the 2030 Agenda under Carlos Merino’s lea­dership to build stronger and greener economies.’

Located in the State of Mexico, this faci­lity has a pro­duc­tion capa­city of 15,000 tonnes of flakes from post-consumer PET per year. Since its foun­da­tion, it has pro­cessed more than 140,000 tonnes of this mate­rial, which has been returned to the pro­duc­tion cycle of new bot­tles. This has saved the same volume of virgin resin, which in turn has reduced the carbon footprint.

About the ALPLA Group
ALPLA is one of the leading companies involved in plastic packaging. Around 22,100 employees worldwide produce custom-made packaging systems, bottles, caps and moulded parts at its 176 sites across 45 countries. The high-quality packaging is used in a wide range of areas, including for food and drinks, cosmetics and care products, household cleaning products, detergents and cleaning agents, pharmaceutical products, engine oils and lubricants.

ALPLA operates its own recycling plants for PET and HDPE in Austria, Poland, Mexico, Italy and Spain, and in the form of joint ventures in Mexico and Germany. Other projects are being realised elsewhere around the world.

About Coca-Cola FEMSA
In terms of sales volume, Coca-Cola FEMSA, S.A.B. de C.V. is the largest bottler of Coca-Cola products in the world. The company produces and sells drinks under the trademarks of The Coca-Cola Company, offering its broad portfolio of 129 brands to more than 265 million consumers every day. With over 80,000 employees, the company markets and sells some 3.3 billion unit cases via two million sales outlets every year.

Through its 49 manufacturing plants and 268 distribution centres, Coca-Cola FEMSA is dedicated to generating economic, social and environmental value for all of its stakeholders throughout the entire value chain.