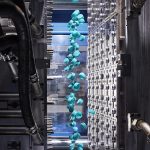 Hard, 28 October 2021 – The ALPLA Group, a global pack­a­ging solu­tions manu­fac­turer and recy­cling spe­cia­list head­quar­tered in Hard, Aus­tria, announced that it has selected the Kansas City region for its new 23,000-square-metre manu­fac­tu­ring plant.

In a faci­lity located at the Blue River Com­merce Center in Kansas City, Mis­souri, the regional orga­ni­sa­tion ALPLA Inc. will create 75 jobs while con­ti­nuing to invest in the city over the next several years.

‘We are excited about our new Kansas City site, which repres­ents a key ele­ment of our growth stra­tegy and our con­ti­nued com­mit­ment to the expan­sion of our injection-moulding capa­bi­li­ties,’ stated James Rooney, Mana­ging Director, ALPLA North Ame­rica. As one of the global lea­ders in pack­a­ging solu­tions, the site will enhance ALPLA’s scope of inno­va­tion and faci­li­tate the demand of recent business.

The new addi­tion in Kansas City will be ALPLA’s fourth site in Mis­souri and the first dedi­cated to injec­tion moul­ding. As such, ALPLA Inc. will uti­lise cutting-edge tech­no­lo­gies to pro­duce inno­va­tive pack­a­ging sys­tems, bot­tles, caps and injection-moulded parts for a wide range of indus­tries. Led by Cushman & Wake­field, the pro­ject is slated to begin in late 2021, with a com­ple­tion date in the fourth quarter of 2022.

‘ALPLA’s decision to grow in Mis­souri demons­trates our state’s abi­lity to sup­port com­pa­nies with our highly skilled work­force, afford­able busi­ness costs and unmat­ched logistical advan­tages,’ said Governor Mike Parson. ‘We are home to global lea­ders across various indus­tries, and we take great pride in pro­vi­ding com­pa­nies like ALPLA with a solid foun­da­tion to ensure their suc­cess in Missouri.’

The com­pany cited the Kansas City region’s cen­tral loca­tion and strong com­mu­nity rela­ti­ons­hips as key dri­vers for the decision.

About the ALPLA Group
ALPLA is one of the leading companies involved in plastic packaging. Around 21,600 employees worldwide produce custom-made packaging systems, bottles, caps and moulded parts at 178 sites across 45 countries. In North America, ALPLA specialises in bottles and caps for the food, beverage, auto, health, beauty and home care industries by using conscientious culture to drive purposeful packaging.

ALPLA operates its own recycling plants for PET and HDPE in Austria, Poland, Mexico, Italy and Spain, and in the form of joint ventures in Mexico and Germany. Other projects are being realised elsewhere around the world.
www.alpla.com

About the Kansas City Area Development Council (KCADC)
Serving the 18-county, two-state Kansas City area, the Kansas City Area Development Council is an economic development non-profit that promotes the region’s business and lifestyle assets to companies and talent around the world. Working closely with its two states, and 50-plus county and community partners, the region has attracted more than 60,000 new jobs over its 40-year history. KCADC also leads the efforts behind the KC Animal Health Corridor, KC SmartPort and TeamKC.
www.thinkKC.com

About Greater Kansas City
Home to 2.5 million people, Kansas City is a vibrant metro in the heart of the US, known as the ‘KC Heartland’. The KC region is a centre for leading industries including technology, logistics, animal health and entrepreneurship, and is home to a renowned arts community.
www.KC.org